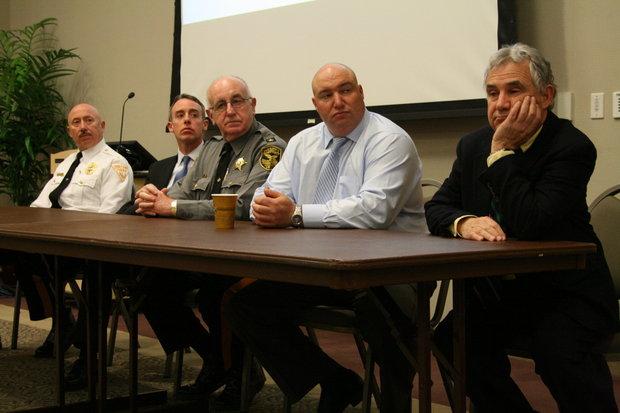 Representatives from the prosecutor’s office and the major police departments in the county were there to speak to the public and take questions. The topic of discussion was the use of force by law enforcement officers.

“In times where the country is questioning things — like whether the war on drugs was a failure, whether mass incarceration was truly the answer to public safety, whether there is a school-to-prison pipeline and, finally, whether black or brown lives matter — it would be nice to win the hearts and minds of everyone in this room and the general public,” Webb-McRae said. “However, the goal of this series is to gain mutual trust and respect. That way, when we have a local insistent that challenges the public and also challenges law enforcement, we are not seeking to build trust in times of crisis.”

Cumberland County Prosecutor’s Office held its first Community Engagement Series where law enforcement officials taught the public about the use of force. Lt. Adam Austino of the Vineland Police Department did a presentation during the event at Cumberland County College on Wednesday, Jan. 13, 2015. (Don E. Woods | For NJ.com)Don E. Woods | For NJ.com

Law enforcement officials in Cumberland County were under scrutiny for its use of force practices after the shooting death of Jerame Reid during a traffic stop in Bridgeton on Dec. 30, 2014. There was further scrutiny after the in-custody death of Phillip White in Vineland on March 31.

The program’s advisory board and steering committee — made up of local leaders from the community — created the agenda.

Lt. Adam Austino of the Vineland Police Department led the presentation into use of force policies. Ausinto works in the internal affairs unit for the police department and was previously the department trainer.

The in-custody death of Phillip White in Vineland and shooting death of Walter L. Scott in North Charleston, South Carolina– and the bystander footage taken of the incidents — are the most recent examples of people videotaping police officers.

It goes back to the Constitution

According to Austino, use of force laws and regulations are rooted in the U.S. Constitution and the Fourth Amendment, which protects citizens against unreasonable search and seizure. The use of force against suspects falls under the seizure category of the amendment. There have also been U.S. Supreme Court rulings that uphold this characterization.

There are six levels of force

Use of force instances can be broken up into six categories, according to Austino.

Constructive authority is when physical contact is not utilized when exerting control over a subject.

Physical force is contact with a subject beyond what is generally used in order to effectively arrest a subject. This is based off of how much the subject is resisting and includes things like holding someone down or putting him or her into an arm lock.

Mechanical force is the use of a device or substance other than a firearm to overcome a subject who is resisting. This includes the use of a baton, pepper spray or a canine.

Deadly force is used when there is a danger or death or serious bodily injury. This includes firing a weapon at the direction of a person.

Drawing a weapon on a person does not count as deadly force and instead falls under constructive authority, Austino said.

The final level, which is a relatively new designation, is mechanical force. Mechanical force is the use of less lethal projectiles or the use of a conducted energy device — like a TASER — by law enforcement. This is used when reasonably necessary to prevent death or serious injury.

It varies case by case

According to Austino, a police officer’s decision to use force is made in a split-second fashion and the determining factor is if the officer has a reasonably belief that there is a danger that requires a certain level of response — escalating and de-escalating with the subject.

“Use of force shouldn’t be considered a ladder,” Austino said. “The officer doesn’t have to exhaust one type of force before they move on to the next. It should be considered like a toolbox. You have a toolbox at your disposal with these types of forces. What’s appropriate under the circumstance? The officer may reach in and use the appropriate tool.”

Police are not trained to shoot weapons out of people’s hands and knowing karate is not a skill that helps with arresting people, Austino said.

Officers are also not allowed to shoot at moving vehicles unless there is an imminent threat of death or serious bodily injury.

So that means no shooting at engine blocks or tires.

De-escalation is an important factor

Sometimes it involves de-escalating the situation before it can become tragic.

According to Vineland Police Department Chief Timothy Codispoti, lessons into how to de-escalate a situation have become an important part of the regular training police officers receive. Such training lessens the amount of force needed in a situation, Codispoti said.

According to Bridgeton Police Department Chief Michael Gaimari, he ooks for officers that are able to communicate to residents.

Cumberland County law enforcement agencies also use the Police Chaplain program, which uses volunteers — mostly from faith-based organizations — to reach out to people and to help people.

Using chaplains has begun to spread across the country, with Chaplain Gary Holden returning recently from teaching a New England department about the program.

Webb-McRae hopes to make the Community Engagement Series a reoccurring program this year. The second meeting is scheduled for March 9 and the topic is the investigation into use of force incidents.

This article is a re-print from NJ.com – Don E. Woods. Don E. Woods may be reached at dwoods@njadvancemedia.com. Follow him on Twitter @donewoods1. Find the South Jersey Times on Facebook.

Error: (#10) This endpoint requires the 'manage_pages' permission or the 'Page Public Content Access' feature. Refer to https://developers.facebook.com/docs/apps/review/login-permissions#manage-pages and https://developers.facebook.com/docs/apps/review/feature#reference-PAGES_ACCESS for details.
Type: OAuthException
Code: 10
Please refer to our Error Message Reference.
Find us on facebook